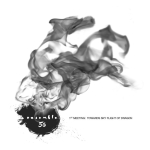 Attila Dora, Rafal Mazur and Mieczyslaw Gorka sought inspiration from the ancient Chinese book "The Wanderer" by I Ching in calling themselves Ensemble 56. They conceptualize the philosophy of strangers meeting and interacting through their music, all of which is improvised in real time.

Spontaneous, improvised music is an art in its own. Dora, Gorka and Mazur have transcended the ordinary to find an intuitive weave and give their music a presence of depth and dimension. The path is not always distinct, it becomes clear as they let their imaginations co-exist and divine the journey. Along the way come sweet surprises, tangy interludes and intense dialogue to give the music an earthy yet surreal quality. The trio has not tacked a name to the compositions. Numbers suffice, words are of little import.

Their empathy has grown through both live performances and two earlier recordings, and they lose no time in finding their dimension. Gorka sets it up with bright permutations, but that lasts only until Dora jumps in. He torques and squeezes his lines, letting them jump out and slam. He stops and starts to tongue slap accompanied by squiggles from Mazur's bass. They have now moved into the next stage, and in a complete change of direction. Dora is in the free zone, but he now ferments his ideas in a more pronounced vein. Space has been opened and worked judiciously with Mazur, as Gorka lightens the hue with his on percussion. The approach has been defined and balanced perfectly.

One of the hallmarks of the CD is the way in which dissonance and symmetry are complementary. Gorka's tonality and resonance illumine "5," and Dora is in consonance with the mood. But he gradually moves out of the pulse, shifting into high gear with Mazur rumbling down on the bass. Each stays within their boundaries, yet there is an assimilation of the individual streams which makes the flow gleam.

Spontaneous invention and a dynamic approach sing the sounds of Ensemble 56. The call is irresistible.