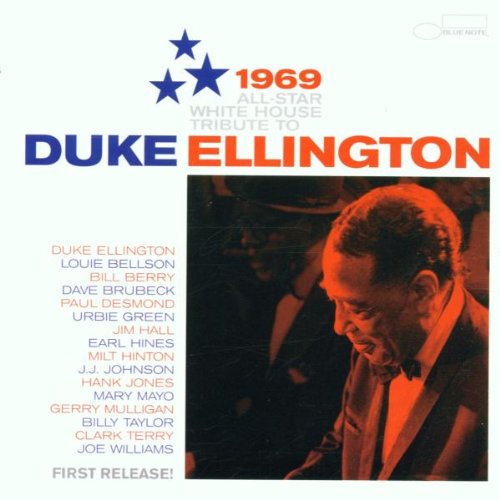 Duke Ellington celebrated his 70th birthday on April 29, 1969 as a guest of President Richard Nixon at the White House. In addition to receiving the distinguished Medal of Freedom, Ellington witnessed an all-star tribute concert featuring many of the day’s great jazz musicians in their prime, which until now, was lost. Recently a cassette belonging to then White House advisor Leonard Garmet found its way to Blue Note Records and the label enlisted Malcolm Addley and the National Archives to digitally remaster the cassette recording. For the first time “1969: All-Star White House Tribute to Duke Ellington” is available to the public and without a doubt one of the great releases of the year.

The tribute band featuring, among others, Dave Brubeck, Paul Desmond, Clark Terry, Joe Williams, J.J. Johnson, Jim Hall, and Milt Hinton, elegantly works through twenty-seven Ellington / Strayhorn compositions, including “Take the ‘A’ Train, “Satin Doll, “Sophisticated Lady,” and “Mood Indigo.” The musicians all play the repertoire straight and do not stray too far from the composer original intentions, but each track is a true gem of wonderfully performed music that made Ellington proud.

Ellington is not a performer on this album until the last track, which is a three minute solo piano piece and sounds mostly improvised dedicated to the President Nixon’s wife entitled “Pat.” “Pat,” not only is the only track that Ellington performs on, but also, the albums only original composition, which until now, wasn’t available anywhere.

Very rarely does an unreleased album come along that not only contains this much top rate music performed by a great ensemble, but also is a historically significant event. “1969: All-Star White House Tribute to Duke Ellington” resides in the ‘must have’ category for any jazz and/or Ellington fan.