By C. MICHAEL BAILEY
September 18, 2012
Sign in to view read count
Track review of "On Broadway" 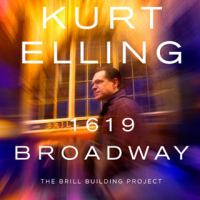 Where female jazz vocalists are plentiful, male jazz vocals exist in vast minority. With Mark Murphy in twilight, Kurt Elling has few peers in the realm of male jazz vocals where sheer inventiveness and muscularity are concerned. Elling's facility is one so great and his musical vision so clear that, at least for the time being, no one can touch him. He further establishes himself as the preeminent vocalist with the ambitious and successful 1619 Broadway: The Brill Building Project.

Elling opens the recording with the quintessential Brill Building composition, "On Broadway." Its story is a bit interesting in that it was not originally a Brill Building product. The song was first composed by Barry Mann and Cynthia Weil at Aldon Music, located at 1650 Broadway, down the street from the Brill Building. Jerry Lieber and Mike Stoller noted that the Drifters had booked some studio time and were one song short. "On Broadway" was considered but the pair thought it needed work, so they joined Mann and Weil for some fine tuning. The result was the Drifters' 1963 Atlantic Records, with Phil Spector playing lead guitar. Guitarist/vocalist George Benson later covered the piece to great acclaim.

Elling, in collaboration with longtime pianist Laurence Hobgood, turns the song on its ear with guitarist John McLean going all Philip Catherine on it. After a lengthy, street-sound introduction, drummer Kendrick Scott provides an early tempo with a backbeat. Bassist Clark Sommers lays down the harmonic, doubled by McLean's damped guitar that he progressively opens up until cutting loose for an angular and angry solo. Elling sings in his singular, superb fashion, making this song and the entire recording a welcome addition to the marketplace.