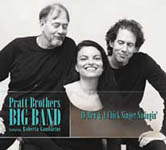 I could endorse the Pratt Brothers' second album on the basis of Dean Pratt's candid and incisive liner notes alone, but entertaining and provocative as they are, the music is even better, encompassing half a dozen persuasive instrumentals and four superb vocals by the outrageously talented Roberta Gambarini.

As far as the ensemble is concerned, the album title says it all—mama don't 'low no ballads 'round here. This is a smoking, straight-ahead, Basie-style firestorm from end to end, including three blistering charts by one of the Count's most celebrated arrangers, Ernie Wilkins. "When Your Lover Has Gone, usually a mournful lament, is cleverly accelerated in a dazzling chart written by Don Piestrup for (but never recorded by) the Buddy Rich band. The closest the brothers come to slowing the tempo is on Wilkins' amiable treatment of Rodgers and Hart's "Falling in Love with Love.

Gambarini, a native of Torino, Italy, who was a finalist seven years ago in the Thelonious Monk vocal competition, is not only blessed with remarkable range and flawless enunciation, she actually understands what she is singing, warmly and naturally conveying the lyrics on two memorable standards, Hoagy Carmichael's "Skylark and Brooks Bowman's "East of the Sun, and bracing originals by Tom McIntosh/Meredith D'Ambrosio ("Cup of Life ) and Kenny Dorham ("Fair Weather ). She scats well too, even pausing playfully to revisit "Poinciana on the coda to "East of the Sun.

Coniglio and trumpeter Don Sickler are out front on "Falling in Love with Love, Stepton, Williams and alto Marc Phaneuf on "When Your Lover Has Gone. Following "East of the Sun, the band wraps the package with Wilkins' suitably named "Sixteen Men Swinging, which embodies sturdy solos by Karn, Whitfield and each of the Pratt brothers.

One can't always trust advertising in these days of super-hype, but there are times—such as this—when what you see (or in this case, hear) is what you get, namely 16 Men & a Chick Singer Swingin'.

About The Pratt Brothers Big Band