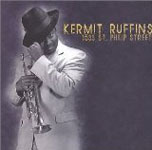 Especially in these times of national anxiety and its stronger foil, patriotic pride, it is both comforting and encouraging to be able to hear the sound of great, upbeat All-American music such as this latest release from Kermit Ruffins. Named for the ReBirth Brass Band founder’s new jazz club in the heart of New Orleans, Ruffins’ album tips a wide-brimmed hat to a number of the Crescent City’s older favorite sons, both native and adopted.

Combining the gruff growl and golden blare of Louis Armstrong with the humorous arrangement talents of Louis Jordan, Ruffins lets loose with a brass-covered smile on the Jordan favorite "T-I-L-L-I-E" and Sammy Cahn and Julie Styne’s "I Still Get Jealous." Originals like "Drop Me Off in New Orleans" and "Meet Me at the Second Line" combine traditional French Quarter fare with contemporary catches ("Drop Me Off" refers to red beans and greens but also includes the term "home boy" and its familiar derivative "homey"). Ruffins’ band is also a gumbo of old and new which includes trombonist Corey Henry and clarinestist Dr. Michael White along with Harry Connick Jr’s rhythmic drummer Arthur Latin and bassist Neal Caine. So, to quote Ruffins, "When you’re feeling down and out and you feel there’s no way out / Get dropped off in New Orleans." And if you can’t visit Kermit at 1533 St. Philip, this album should do the trick.

Ole Miss Blues; Drop Me off in New Orleans; Tillie; Bye and Bye; Wrap Your Troubles in Dreams (And Dream...); Black and Blue; I Still Get Jealous; Jack, I'm Mellow ; Meet Me at the Second Line; Keep Walkin'; In the Bag; Some of These Days.