By GLENN ASTARITA
October 10, 2007
Sign in to view read count 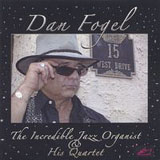 Atlantic City, New Jersey area Hammond B-3 organ master Dan Fogel might not enjoy the notoriety of his peers, but he's been an active leader and participant of the Northeast jazz scene for quite some time. Owing to the Jimmy Smith and Jimmy McGriff schools of the jazz-organ combo setting, Fogel enamors the sound of this traditional format by recording the session in a nineteenth century church. Therefore, the inferences of a typical groove and swing-based organ-combo get an ambient and spiritualized uplift here.

Fogel doesn't aim to revolutionize the roads frequently traveled, but largely orchestrates a personalized spin on jazz standards. He often thrusts guitarist O'Donel Levy and tenor saxophonist Pete Chavez into energized forays, while stretching out in prominent fashion throughout. The band generates a Latin pulse, nicely-contrasted by Chavez's airy and edgy choruses on the bop classic, "A Night In Tunisia. Yet they alter the flow during the slow-tempo blues take on "Willow Weep For Me, marked by Fogel's drawling and vibrato-drenched chord phrasings. Moreover, he provides multihued tonalities, topped off by his silvery chord progressions and understated support for his fellow soloists' bluesy and blustery passages. And they slam matters into a higher-gear on the sprightly medium-tempo swing vamp of "Broadway.

This is an entertaining and irrefutably accessible effort that merges the raw fundamentals of the organ-combo vibe with a contemporary boost.

Just Friends; A Night in Tunisia; Blues After All; It's You or No One; Out of This World; 15 West; Willow Weep for Me; I Thought About You; Broadway.