By GLENN ASTARITA
February 10, 2016
Sign in to view read count 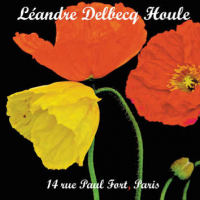 Leo Records' press release correlates this trio's output to "heavy artillery" music, but it's most assuredly not all about bombast or in-your-face type avant-garde improvisation. Hence, these esteemed improvisers do what they do best in front of a select audience in Paris. Bassist Joelle Léandre and Benoit Delbecq hail from France and like Canadian clarinetist Francois Houle, are among the crème de la crème of global improvisational artisans, and as anticipated, they dutifully get the job done here. The agenda broadcasts a potpourri of thought-provoking applications, where the musicians often interrogate each other's musical psyches via gradual alignments, scathing flurries and deep, trio-based processes. It's serious stuff, but softened with lighthearted musings.

Master bassist Leandre's intricately engineered phrasings and buzzing arco lines drive many of these asymmetrical movements, complemented by Delbecq's deftly articulated sound sculpting and Houle's soft or boisterous choruses. They circumnavigate through an aggregation of disparate moods, countered by sprightly dialogues and much more. For example, on "14 rue Paul Fort 1," Léandre casts a sense of urgency with her scraping, buzz saw type attack and walking tones, as her counterparts float atop the vigorous undercurrent amid odd-metered subplots and swelling passages.

"14 rue Paul Fort 5," is built on Houle's whirling cadenzas and Delbecq's animated lower-register voicings. The trio circles through an assortment of motifs under the auspices of a semi-structured composition. Essentially, they reimagine just about everything previously enacted, highlighting the musicians' acute, on-the-fly creative sparks. Whereas, "14 rue Paul Fort 6" is designed with a hidden or subliminal melody, tinted by the pianist's harmonious clusters, executed with a minimalistic approach, and framed by the bassist's angular crosscurrents. Here and throughout, the artists are at the top of their game and undoubtedly up for the occasion.