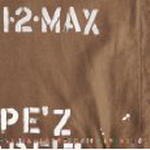 As the title of Pe'z's 1. 2. MAX reflects, the adrenalin kicks in quickly and doesn't let up. This five-piece band from Japan, which has been together for ten years, purveys a brand of high energy, groove-based anarcho-jazz which takes jazz- funk, ska and the irreverence of punk as its references. In terms of energy and originality, Pe'z is reminiscent of English band Acoustic Ladyland.

The opening bars of 19th century German composer Hermann Necke's "Csikos Post," however, are rather genteel, with Kadota Kouskes' sax and Ohyama Wataru's trumpet carrying the melody, and Hizumi Masayuki's piano following suit quite lyrically. It's the calm before the storm, as the band explodes into a breathless, ska-infused soundtrack to a Buster Keaton chase scene, complete with super-fast piano runs and Kou's galloping drums. Most of the compositions follow the same format; the two-pronged brass front line harmonizes the main melodic lines over a thundering rhythm section. Solos are limited to short bursts which serve as little more than cameos in the relentless, high energy groove which Pe'z is all about.

The title track is foot-to-the-floor stuff, and the upbeat jig-like melody is a winner. Masayuki's distorted keyboard recalls Bojan Zulfikarpasic, and his riffing sounds like a fuzzy toned electric guitar. Masayuki stamps his personality on all the compositions and there is obvious technique in his staccato bursts and brief, swirling runs. On "Cherry Blossom Avenue." he displays his Hammond chops on a track with the kind of B movie credentials which would appeal to Quentin Tarantino.

Less rough-edged than on its previous CD,Samurai Meets the Enemy (Apart Records, 2008)—which took jazz classics to punk—the compositions and production here are more polished, though the energy levels remain high. Pe'z keeps a party groove going, though there are glimpses into a jazz quintet at work, for example on "Miracle Thunder," when trumpet and sax solo over Nirehara Masahiro's driving double-bass, with piano comping in the background. Similarly, when sax and trumpet drop out on "Even If The Flowers Fall, We Won't," the rhythm section waltzes confidently through a jazz trio exercise, though in both these cases the interludes are brief before the charging melodies return once more.

Despite the furious rhythms it's hard to resist the celebratory melodies of these tunes. Shifts in tempo allow time to draw breath for a few seconds at a time, and the solos seem to serve a similar purpose, being so short as to resemble farewell choruses before the band members bid goodnight. There are, however, plenty of little touches to maintain the attention; Masayuki's strong riffs on keyboard, an unexpected moment of pause, during which Kouske unfurls a twisted sax exclamation, a '70s Herb Alpert-type melody here and a comic touch there.

The hugely enjoyable "Woo-Ha!!" closes the CD," a party anthem if ever there was one. This is a tremendously fun recording from talented musicians who sacrifice shows of virtuosity for groove. Absolutely guaranteed to get your party, club or festival rocking and rolling.