By FLORENCE WETZEL
January 25, 2012
Sign in to view read count 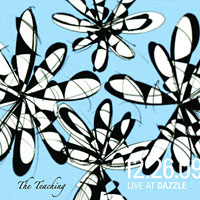 One of the most inspiring stories in jazz concerns saxophonist John Coltrane's valiant attempt to kick heroin. In the midst of a physical firestorm, Coltrane had a spiritual awakening, and he asked God to give him the means and privilege to make others happy through music—which he ultimately did, creating jazz history in the process.

The new generation of jazz musicians has different issues—struggling less with addiction and more with attracting an audience and finding time to do their art—but the intention to combine jazz with spiritual elevation lives on. One group that holds this aspiration is The Teaching, a piano-bass-drums trio whose stated aim is to foster a musical environment of devotion, surrender, sensitivity, enthusiasm, and joy, an objective they fulfill beautifully on 12.26.09 Live at Dazzle.

Although The Teaching is an essential member of the thriving Seattle jazz scene, it also has a home in the thriving Denver scene. Drummer Jeremy Jones hails from Colorado, and since 2008 The Teaching has been coming to Denver for an annual holiday show at Dazzle, a listening room that hosts national acts on a regular basis and also provides a haven for local musicians. Part of Dazzle's commitment includes their offshoot, Dazzle Recordings, which released this CD of The Teaching's 2009 show.

The five songs are a vibrant feast of sound: the melodies are fresh and radiant, and provide a springboard for the group's open and shifting improvisations. The tunes' generous length allows the trio to create ambient grooves with a jam-band sensibility, anchored throughout with vigorous swing. Things heat up even more when Colorado-based saxophonist Serafin Sanchez joins the group for some serious blowing on "Beautiful Brooklyn" and, in particular, "Get 'em Blues," a fine example of The Teaching's ability to update a familiar idiom. The Teaching also employs group chanting—an echo and expansion of Coltrane's A Love Supreme (Impulse!, 1965)—and Live at Dazzle is punctuated throughout by the enthusiastic audience response, which only heightens the music's energy.

Now that jazz is firmly in what some are calling the post-Wynton Marsalis era, it is breathing freely once again. By seamlessly expanding the borders of jazz and welcoming different families of sound, groups like The Teaching help point the way forward. And when such talent is combined with a strong spiritual imperative, the results are bound to be compelling; surely Coltrane would approve.

Fragrance of Eminence; Being Joyful; The Astral Gift; Beautiful Brooklyn; Get 'em Blues.