By EYAL HAREUVENI
August 12, 2014
Sign in to view read count 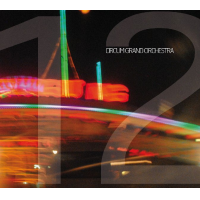 12, the fourth album of the French, Lille-based Circum Grand Orchestra and flagship of the Muzzix musicians collective, marks a significant change in the Orchestra's history. After being led for a decade by guitarist Olivier Benoit, now new artistic director of the prestigious Orchestre National de Jazz, they are guided by bassist Christophe Hache, who wrote each composition on this release. The move from a six-string leader to a four-string guide did not affect the restless, inclusive spirit of this orchestra.

Their strength lies in the strong personal voices of the thirteen musicians—a vigorous six piece horn section, pianist and a double rhythm section (two guitarists, an electric bassist and a double bass player and two drummers) with the freedom for each to submit their own interpretations. Hache cleverly employs the massive horns' power and depth with the orchestra's driving energy to offer a richly balanced variety of styles and influences covering the spectrum from the lyrical through frenetic polyrhythms and rock-based attacks.

The title piece suggests an intricate, colorful tapestry. First come gentle, lyrical sounds introduced by a choir of horns. Later, a patient sonic palate expands with playful rhythms until it climaxes in an emphatic, poetic discourse between the horns and a subtle shifting pulse. "Graphic" experiments with nuanced orchestral timbres including the evocative vocals of flugelhorn player Christophe Motury before it settles on a dense and powerful fusion texture to highlight the distinct approach of guitarists Ivann Cruz and Sébastien Beaumont. "Hectos D'ectot" and "Padoc" solidifiy a powerful fusion vein with muscular free jazz improvisations including an impressive solo segment by Hache with an effects-laden electric bass on the former and thorny solo guitars on the latter. The final piece, "Principe de Precaution," demonstrates the diverse and versatile scope of this orchestra, willing to take risks and experiment with sounds, without neglecting harmonic possibilities and powerful, infectious rhythms.