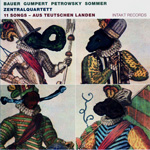 Attention to tradition is too often mistaken as adherence to conservative orthodoxy. In jazz, the culpability often rests at the feet of the neo-conservative crowd, a frequently demonized assembly whose stock rises and falls with regularity, depending on the body of listeners polled.

The four players who form the Zentralquartett have little time for such meta-musical squabbling. They're too busy making music that stretches the malleable and porous boundaries of improvised music to their own highly listenable designs. Like Albert Ayler before them, they draw on European folk forms as compositional grist for 11 Songs—specifically the Volkslieder, a strain of medieval German songs which are particularly susceptible to historical modification and crosspollination.

Pianist Ulrich Gumpert acts as defacto skipper of the ship, handling arranging chores and even contributing a pair of originals that fit right in. His temperament and approach bring to mind the playful insouciance of Brueker and Mengelberg, but the band's transitions aren't as jarring or jump-cut abrupt as those of their Dutch brethren. Each of the pieces fit smoothly into a jigsaw whole. The symmetry lends the whole project a welcome programmatic feel that's augmented by its economical running time. Humor and variety exist in abundance with Gumpert's keys, frequently in charge of thematic thrust.

On the opening "Der alte Thüringer, episodes of fracas-fraught blowing alternate with returns to a jaunty, centering calypso motif. "Es fiel ein Reif develops from a somber trombone-piano preface into a slowly swelling, tribal-sounding promenade for malleted toms and flute. Petrowsky leads the second half of the piece with a passionate, hard-bitten alto solo flanked by powerful piano and drums.

Sommer is the ideal drummer for these sorts of diversified surroundings. His expertise with mallets and at fashioning all manner of muscular interlocking rhythms makes the absence of a bass hardly noticeable. His solo on the tail end of "Es ritten drei Reiter zum Tore hinaus cycles through a colorful array of percussive permutations, even incorporating an elastic tympani rhythm and chanting into the undulating blend of martial beats.

On Gumpert's "Conference at Conny's his pummeling brushes provide the swinging trampoline foundation for another one of Petrowsky's glossolalic alto sorties. A similar dynamic drives "Kommt, ihr G'spielen, which opens into a rolling gospel-meets-bop groove and closes with Petrowsky's alto scouring the freak register, amidst a rising din. The members of Zentralquartett have managed to mine seemingly archaic sources and process them into freshly-minted improv currency without sounding the least bit slavish or imitative in the process.