Various Artists: 101 Things to Do in Bongolia 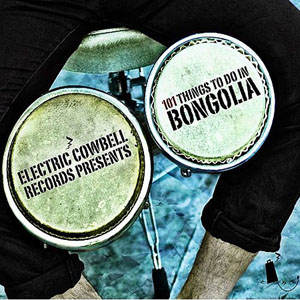 101 Things to Do in Bongolia compiles the first year of 45 RPM singles, plus a few bonus remixes and other surprises, released and digitally compiled by Brooklyn-based Electric Cowbell Records, founded by percussionist/entrepreneur Jim Thomson. Thomson also plays in two bands featured here (the CSC Funk Band, and Bio Ritmo) and has continued Cowbell operations with assistance from keyboardist Marlysse Simmons (also in Bio Ritmo) and Stuart Bogie, who has helmed horns and production for Medeski Martin & Wood, Sharon Jones & the Dap-Kings, Antibalas Afrobeat Orchestra and numerous others.

Believe it or not, Bongolia is even more ridiculously eclectic than its roots, and presents music from New York City's best Latin boogaloo band (Spanglish Fly), one of modern salsa's best bands (Bio Ritmo), and Boston's best Ethiopian groove band (Debo Band), among others.

Several different Latin quarters are well represented in Bongolia. Spanglish Fly's "Let My People Bugulú (Remix)" excels from its minimalist approach, building from vocal chants and handclaps atop clanging drums into an irresistibly limber sing-along groove replete with spicy piano, hearty trombone and thick Afro-Cuban percussion. "Silbando (GRC Remix)" reshapes Los Riberenos' tune with new electronic effects and loops that don't interfere with or overshadow, but genuinely accessorize and complement, the skeletal rhythm of their original tune (from the label's acclaimed retrospective Roots of Chicha Volume 2). Bio Ritmo rolls out the textbook "Dina's Mambo" and "La Muralla," a simply delicious modern Latin groove overflowing with vocals and topped like whipped cream with frothy congas, while "Majadero (EC Remix)" shifts its Latin pulse between Afro-Cuban and Caribbean, the sound of an iPod in the modern musical barrio.

Other singles come from completely different directions, especially the remix of the Debo Band's Middle Eastern trance/chant "Adderech Arada," which scratches, cuts and loops the original vocal into a modernist collage of ancient sound; the thick electronic Brooklyn Chimp remix of "A Troll's Soiree" by CSC Funk Band, a hurricane of kalimbas and horns; and the freakout "Freddie's Tea," which explores deep progressive rock space with monstrous organ chords and interstellar guitar that culminate and dissolve in a foggy, dark Pink Floyd meets Grateful Dead haze.

Electric Cowbell Records may be headquartered in Brooklyn, but the music it promotes genuinely comes from all over the map.