1,000 Recordings To Hear Before You Die

By CHARLIE RICCI
November 9, 2013
Sign in to view read count 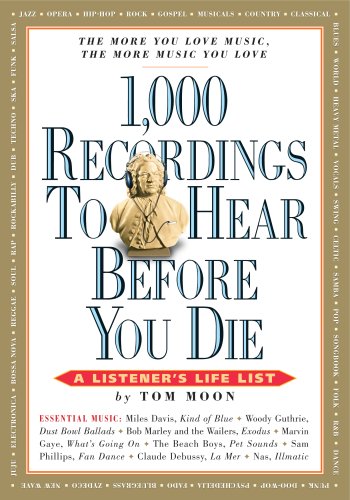 Tom Moon once played saxophone in Maynard Ferguson's big band. More famously, he is a music critic who worked for the Philadelphia Inquirer, Rolling Stone Magazine, and National Public Radio. His top flight music credentials helped him complete his first book, 1,000 Recordings To Hear Before You Die.

The theme of this massive tome is easy to understand. It isn't intended to be a list of Moon's favorite works. Instead, he choose 1,000 recordings, most of them full length albums or CDs, (a few singles like The Beach Boys "Good Vibrations" or The Temptations "Ain't To Proud To Beg" are included) that he believes everyone must hear to be fully musically educated. Moon's opinions are written in a very non-effete style because he just explains what he loves about each recording and what he believes readers will gain by listening to it.

The book has everything imaginable. Recent bands such as Radiohead and The Arcade Fire are included as are 90s stalwarts Nirvana, Pearl Jam, and Alice In Chains. Mainstream artists such as Abba, Neil Diamond, Boston, Norah Jones, and Chicago are featured as are both Elvises, Rick Nelson, and Chuck Berry. The Beatles have six entries. Miles Davis has five. Surprisingly, Wolfgang Amadeus Mozart only has three.

Opera, classical, jazz, world music, Broadway musicals, and movie soundtracks all have their place. West Side Story and The Sound of Music receive equal time with Beethoven symphonies, The Sex Pistols, Arrested Development, Count Basie, and Nina Simone. Music from Third World Asian and African countries also have a significant share of this book.

Moon published each entry alphabetically by artist, in lieu of separating them by era or genre, to make sure readers would not just peruse their favorites. Therefore, you can read about the gospel group The Abyssinian Baptist Choir and their 1960 album Shakin' The Rafters on page 4 and then on page 5 move right on to AC/DC and 1980's Back In Black.

I realize it is virtually impossible for everyone to like every recording in the book and I'm sure Moon understands that too. He even admits he needed an education in classical and opera and sought help from the Inquirer's classical music critic, Daniel Patrick Stearns, to gain further appreciation of the art form.  In the end Moon found as many wonders among the works of music's original long-haired musicians as he did among those in the world of rock n' roll.