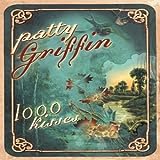 In today’s digitalized culture, where we have become so accustomed to sensory overload, an artist like Patty Griffin is a rare treasure. Griffin first displayed her unique gift for simplistic beauty on 1996’s Living With Ghosts, an album sparse in its instrumentation (the record featured only guitar and vocal and was intended to be “demo style”), but full of unvarnished splendor. On the heels of Ghosts, which flew below the mainstream radar, came the underwhelming Flaming Red, seemingly an attempt to “break through” with the previously absent heavy production and rocker tendencies. 1000 Kisses, Griffin’s first release in four years, finds her returning to a delightfully stripped-down realm once again wherein she glimmers amidst entrancing choruses of wistfulness and melancholy.

No one is able to more profoundly depict the tragedy of love’s disintegration than Griffin, who is blessed with a voice of intense raw emotion and a stunning ability to write utterly simple verses that avoid the trap of banality. On the stellar “Be Careful,” she delicately croons, “Be careful how you bend me/Be careful where you send me/Be careful how you end me,” epitomizing her penchant for a beauty that is both aching and palpable. On “Rain,” the album opener, she tells the familiar story of clinging to a lover who has become hardened: “Strange how hard it rains now/Rows and rows of big, dark clouds/But I’m still alive underneath this shroud...”

Although it may defy traditional categorization to a certain extent, the triumph of 1000 Kisses is that it does not try to be a pop record. Instead, it exudes the confidence of an album wholly comfortable in its own skin, a rare phenomenon in this age of manufactured everything. Griffin’s reemergence on the scene will no doubt go a long way in restoring the faith of those who have become disillusioned by the contemporary singer-songwriter.