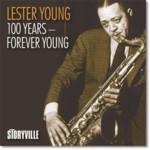 In October 1944, Lester Young, one of the most influential saxophonists in jazz, was inducted into the US army. In the 15 months that followed he was subjected to blatant racial prejudice then court martialed for possession of marijuana and alcohol and sentenced to a year in a detention barracks. He returned to civilian life severely traumatized. As a result, the received wisdom is it's not worth listening to recordings made by Young after his discharge.

This double album from radio shows and concerts proves the reverse. True, the sound is variable throughout and there are some irritating and badly cut announcements, but there is ample evidence that, while in the 1950s Lester might not always have leapt in quite as adroitly as he had done before Uncle Sam got hold of him, he could still cut it... and cut it pretty well.

The first five tracks are from Birdland in 1951. On all of them, particularly the opener, "Indiana" and his own "D.B. Blues" ( D.B. stands for detention barracks), Young gives good account of himself. He is aided by the competent but unremarkable Jesse Drakes on trumpet and backed by a rhythm section led by John Lewis on piano. There follows a rather shrill "Too Marvellous For Words," recorded at Birdland two years later, with Horace Silver on piano.

ADVERTISEMENT
The next six tracks come from George Wein's Storyville Club in Boston, with Gildo Mahones on piano. Mahones, who played with Young for two years, has his moments, in particular on "Just You, Just Me" and "It's Only A Paper Moon." Young approaches the latter in rather desultory fashion but picks up considerably for his two solos. He goes on to turn in excellent versions of "I Cover The Waterfront" and "Up And At 'Em."

All the other tracks were recorded in 1956, when Young was in good shape, following hospital treatment for a nervous breakdown. Those recorded in Zurich include a lovely, lazy version of "Polka Dots And Moonbeams," followed by energetic takes on "Three Little Words" and "Lester Leaps In" and culminate in a rather subdued version of "Oh, Lady Be Good" featuring Miles Davis on trumpet.

Young is on very good form too on three numbers with Idrees Sulieman, recorded at Cafe Bohemia, again in 1956.

Forever young he wasn't. The Prez was only human... but always interesting.

Track Listing: CD1: Indiana; A Ghost Of A Chance; How High The Moon; D.B. Blues; Lullaby Of Birdland/Up And At 'Em; Too Marvellous For Words; Lullaby Of Birdland; Just You, Just Me; It's Only A Paper Moon; Speak; I Cover The Waterfront; Up And At 'Em; Three Little Words; I Cover The Waterfront; D.B. Blues. CD2: Lester's Mop Mop Blues; Tea For Two; Polka Dots And Moonbeams; Three Little Words; Lester Leaps In; Oh, Lady Be Good; Oh, Lady Be Good; Lester's Mop Mop Blues; Jumpin' With Symphony Sid; Lullaby of Birdland; Lester Leaps In; These Foolish Things; Three Little Words; Pennies From Heaven; Polka Dots And Moonbeams; Indiana.