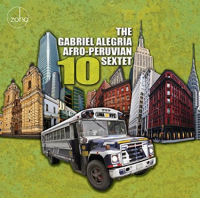 10 celebrates the ten-year anniversary of the Afro-Peruvian Sextet founded and simultaneously led by horn player Gabriel Alegria from New York City (where Alegría serves as Professor of Jazz Studies at New York University) and Lima, Peru. "It's a concept album," Alegría shares. "For our tenth anniversary, we wanted to give special care to American and Peruvian standards. It all comes together in the arrangements in the Afro-Peruvian style. We've incorporated many guest artists, people who have helped us along the way. Most importantly, we've brought together jazz musicians with eminent Peruvian musicians, and we're the glue that holds it together."

10 is full of highlights from the American and Peruvian canons, but none shine more brightly than its first two tunes. The famous "Caravan" (by Juan Tizol and Duke Ellington) steps out on acoustic bass and percussion before erupting into its full-blown Afro-Cuban-Peruvian jam overflowing with sumptuous rhythms and brass; the palpable New Orleans jazz swagger in the solo horns that lead this piece lustily mixes with the Afro-Cuban frenzy of the vocal chants and shouts with which they're interspersed. "Take Five/El Condor Pasa" brilliantly arranges these two famous melodies (the second popularized by Simon & Garfunkel as "If I Could") to be played simultaneously by the rhythm and horn sections. Who would have thought these two tunes would find their common meeting ground in Latin jazz?

10 offers much, much more. Other classics from the jazz canon include "My Favorite Things" with bassist Ron Carter, an adventurous exploration through well-traveled musical ground; a version of "Birdland" in tribute to the great Peruvian percussionist (and former Weather Report member) Alex Acuña; and Ornette Coleman's famous "Lonely Woman" featuring a children's chorus, another inventive arrangement that challenges the listener's preconceptions of this tune and its composer.

Arturo O'Farrill graces "Himno Nacional del Perú" and "The Star Spangled Banner" with sensitive playing so beautiful and refined that these pieces genuinely feel like historic songs of state.

Alegría founded this Sextet while earning his doctorate at the University of Southern California; during these studies, he recorded and performed with Tierney Sutton, Bill Watrous, Russell Ferrante, and mentor Bobby Shew, all of whom appeared on the Sextet's debut, Nuevo Mundo (2008, Saponegro Records). "Afro-Peruvian jazz is a real thing, and we are going to continue to push it forward," Alegría promises. On the scale of one to ten, 10 advances Afro-Peruvian jazz with a perfect score.