By GLENN ASTARITA
January 4, 2014
Sign in to view read count 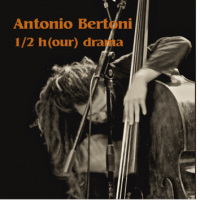 After several decades residing as a prominent UK-based jazz, avant-garde and improvisational record label, it's not a common occurrence for Leo Records proprietor, Leo Feigin to pen an artist or group's album notes. On this outing by Italian bassist Antonio Bertoni, he advises, "I could not help writing in the booklet that this is one of the most original, courageous and spectacular projects I have ever produced." With that, my curiosity spiked a few notches prior to the initial listen.

Bertoni's game plan goes above and beyond the normal call of duty, when considering a conventional jazz improvisation solo bass outing. He derives inspiration from Joseph Beuyss' creation "A One Hour Drama," where a bottle is videoed for one hour. With that in mind, the bassist crafts a minimalistic endeavor, angled and shaded on a strenuously enacted motif with ever-so-subtle paradigm shifts. Bertoni pulls it off on one 36-minute piece, marked by oscillating, super-speed and buzzing arco lines. Essentially, his output could easily be mistaken for two or perhaps three bassists performing in simultaneous fashion.

The bassist generates a trance-like soundscape with no let-up. Augmented by minor variations that surface over the course of the entire piece, he will also reformulate the pitch of his bowing maneuvers into lower and middle registers while zooming in on sub-particles but never swaying from the core premise. One wonders how he could sustain such an intense and physically demanding pace. He executes a circuitous course of action, layered with complex intricacies via his unadulterated power and dexterity. Yet there are no major or perhaps outwardly noticeable digressions. Bertoni's sweltering attack induces a time warp that only lets up towards the finale which ends on a tranquil whimper. To some extent, he seems possessed by a higher entity while maintaining a lofty "art mimicking art"-like objective that makes for an undeniably compelling listen.