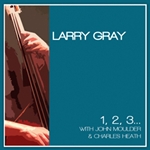 1, 2, 3... is a masterful contemporary jazz release by Chicago jazz stalwart and bass virtuoso Larry Gray. The album is Gray's first trio record that has released under his own name, though he has performed on many as a sideman with such players as Larry Coryell and up and coming Chicago artist Zvonimir Tot. Handling the guitar duties on this album is John Moulder, who's playing pays tribute to the jazz tradition while at the same time striking new sonic ground with his vast harmonic and melodic vocabulary. Rounding out the trio is the venerable Charles Heath, whose strong command of groove and feel pushes the soloists to higher levels of creativity.

Gray's playing on 1, 2, 3... adds further proof as to why he's often referred to as the top jazz bassist in the Midwest. His total command of the instrument is never in doubt. Though he doesn't come across as a "chops" player, he could easily tear up the strings with ease on every tune. One of the best examples of Gray's advanced musicality is on "Song of the Innocents," a solo bass feature that's played entirely with harmonics. In the course of the three minute piece Gray never plays a note that is not perfectly in tune or that has less than perfect tone. Apart from the masterful technique displayed during the piece, his use of space as both a melodic and tension building device, shows a level of musical maturity that is only gained by spending years on the bandstand with some of the best musicians in the world.

While all of the songs on the album were written by Gray, Moulder is shouldered with the melody sections and is featured as a soloist on almost every tune. His playing is a mix of the influences from such players as Pat Metheny, John Abercrombie and Bill Frisell in the personal touch he brings to every note and phrase. While these influences are recognizable in Moulder's playing there's never an ounce of imitation; only respect for those that have come before him and the ability to take the music to the next level. An example is in "Monk and Duke," where Moulder's solo contains hints of all three of these great players, though the solo is entirely his own. Just when a line begins to resemble a "standard" guitar phrase, he twists and turns the line to bring it into new and exciting harmonic territory. It's this ability that allows Moulder to avoid the realm of imitation and firmly stand next to the great players from which he has learned.

1, 2, 3... is an engaging and thoroughly enjoyable album that features three of the top players from Chicago's thriving jazz scene.

No Doubt; Family; Song of the Innocents; Monk and Duke; More Than a Few; Reflect; Who is the Drummer?; One Look; Soffia's Dream; Meditation in D; Far and Away; Portals; E-E-E-lectricity.